The Skill of Our Hands

The Incrementalists are a secret society of two hundred people; an unbroken lineage reaching back forty thousand years. They cheat death, share lives and memories, and communicate with one another across nations and time.
They have an epic history, an almost magical memory, and a very modest mission: to make the world better, a little bit at a time.
Now Phil, the Incrementalist whose personality has stayed stable through more incarnations than anyone else’s, has been shot dead. They’ll bring him back—but first they need to know what happened. Their investigation will lead down unexpected paths in contemporary Arizona, and bring them up against corruption in high and low places alike.
But the key may lie in one of Phil’s previous lives, in Kansas in 1859, and the fate of a man named John Brown.

“A frequently poignant take on the question of whether power conveys authority.”
— Kirkus Reviews

“Both boldly thought-provoking and warmly comfortable; it’s exceedingly fun just to hang out with these characters, but the novel always keeps them on their toes.”
–RT Book Review’s Top Pick

“A slow-burning, utterly engaging read, grounded by a relevant moral conundrum and populated by a memorable cast. . . it goes to work on you in the background, changing you where you aren’t looking. Before long, the world looks different.”
–Barnes and Noble Sci-Fi and Fantasy Blog

“Sometimes a book comes along that hits right at the heart of a social issue, one you can imagine the cool teacher in high school assigning thirty years from now to show how people thought in 2017 . . . honestly, go read this book .”
–The Geekiary

A secret society of two hundred people; an unbroken lineage reaching back forty thousand years. They cheat death, share lives and memories, and communicate with one another across nations and time. They have an epic history, an almost magical memory, and a very modest mission: To make the world better, a little bit at a time. Their ongoing argument about just how to accomplish this is older than most of their individual memories.
Phil, whose personality has stayed stable through more incarnations than anyone else’s, has loved Celeste–and argued with her–for most of the last four hundred years. But now Celeste, recently dead, embittered, and very unstable, has changed the rules–not incrementally, and not for the better. Now the heart of the group must gather in Las Vegas to save the The Incrementalists … and maybe the world.

“Packed with twists and nifty surprises … If you have to call it something, call it genius at work.”  –Booklist, starred review

“A spectacular new contemporary fantasy novel … this book was an absolute home-run for me.”  –Cory Doctorow

“Secret societies, immortality, murder mysteries, and Las Vegas all in one book? Shut up and take my money” . –John Scalzi

“Close your eyes tightly—tightly—and keep them closed . . .”
From a Victorian Ireland of magic, poetry and rebellion, Ida Jameson, an amateur occultist, reaches out for power, but captures Laura Armstrong, a modern-day graphic artist instead. Now, for the man or demon she loves, each woman must span a bridge through Hell and across history . . . or destroy it.
“Every passionate man is linked with another age, historical or imaginary,
where alone he finds images that rouse his energy.” W. B. Yeats
Anchored in fact on both sides of history, Laura and Ida, modern rationalist and fin de siècle occultist, are linked from the moment Ida channels Laura into the body of celebrated beauty and Irish freedom-fighter Maud Gonne. When Laura falls—from an ocean and a hundred years away—passionately, Victorianly in love with the young poet W. B. Yeats, their love affair tangles in Irish history and weaves through Yeats’s poetry until Ida discovers something she wants more than magic.

“With chapter titles that reference Yeats poems … and a cast of peripheral characters that include historical figures like Aleister Crowley … this novel should appeal to aficionados of historical fiction and dark fantasy fans alike. And let’s not forget the obvious: this is an almighty romance about a love so powerful it transcends time.”  –Barnes & Noble Sci-Fi Fantasy Blog

Olivia is a vampire bored with modernity. Tattooist, boyfriend, black-metal singer- everyone you don’t love tastes the same. Since the fall from Eden, she has hungered for love, but fed only on desire.

Dominic O’Shaughnessy is a neuroscientist plagued by impossible visions. When his research and her despair collide in Ireland’s L’Otel Mathillide – a subterranean hell of beauty, demons and dreams – rationalist and angel unite in a clash of desire and damnation that threatens to destroy them both.

“One of the year’s most unusual blends of supernatural fiction and urban fantasy.”
–Library Journal

A short story set between the first and second Incrementalist
books that goes all the way back to the very beginning. 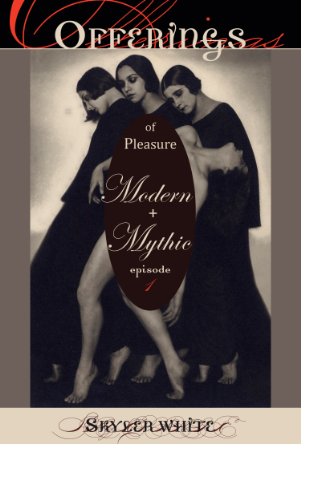 Read it here (for free!)